- Making space for life before kids grow up and leave

When my wife and I were young and out of college we moved to the big city to live the dream as actors. We landed jobs in a touring company and started getting paid real money to pretend. A very small amount of real money.

Before two years were up, we started thinking this is great, but it would be even better if we were a family. We were paid to act, not to think.

Sure enough, the little people started coming along. They didn’t come with endowments or allowances from the great dispensary in the sky.

But we had our imaginations, and some skill with a few key props. Cheap entertainment builds imaginative kids. Bubble wands, costumes, and nature form a fantastic playground for the young.

Eventually we trickled out of the theater and into real jobs, and our kids began to matriculate up into card-carrying musicians, athletes, and video gamers. Suddenly one day we woke up to the realization that whenever our kids got together with friends it was somewhere else. They played at Dana’s house, where the Nintendo was. They had the overnighter at Crystal’s house, in the room with the big screen TV. They skate-boarded and played basketball at Jake’s house, where the sport court was.

It seemed like an impossible time to invest in expensive upgrades to our home. A recession was on. We were thrifty and responsible, if not great planners.

But our kids were growing, and going away, away, away. We knew our time with them would soon be up. So my wife and I started a major overhaul of our place that I called Landscape Armageddon. I rented a bobcat (Do it some day, guys!). We leveled dirt, built a patio and fire pit, installed a trampoline, and started work on a sport court. 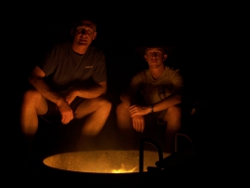 We were rewarded with many nights of teens sitting around the fire, talking until early morning, guests enjoying corn on the cob and s’mores on sunny Saturdays, and bocce ball until dark. The experiences and memories paid us back many times over.

Then came another fork in the road. I lost my livelihood. Our youngest son developed a passion for drums and song recording. With my wife teaching piano lessons, there was room in the house for neither the noise of drums nor the quiet of recording. We made like Yogi Berra and took the fork in the road. Again.

We refinanced the house and built a garage with carriage doors and a big bonus room upstairs. The garage became my workshop, where I started a new business. The bonus room housed my son’s drums, sound studio, and X-Box. I’ll never regret the investment. 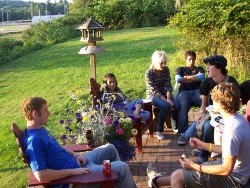 of your kids from bubble-chasing little buddies to burgeoning adults who will too-soon head off on their own quests. Investing in space for gathering, pursuing a passion, or building memories is a now thing. Recession-be-damned.

The garage is a great place to look for that gathering space. It doesn’t require selling the house in a down market or excavating for a home addition. Some doors and interior dressing can turn unused space into Where Life Happens. You won’t be sorry if you make it happen before those young adults go away. 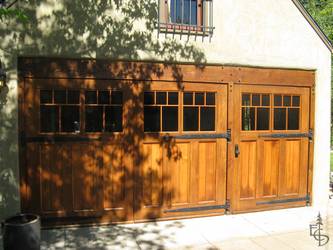 Thanks you and you company for building these beautiful doors they are gorgeous the project is about complete and I wanted to recognize your work. If you need a reference in NJ feel free to use me. 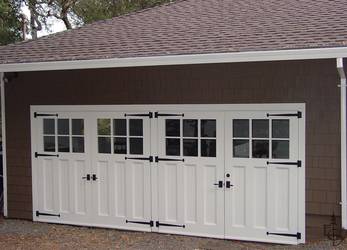 We got the doors this afternoon and got them uncrated. WOW, are they beautiful! Quite a work of art!!! We are excited to get them stained and hung! They will make quite a statement. ... Thank you for creating such a quality product! 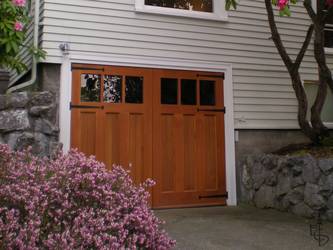 The doors are absolutely gorgeous. I cannot believe the amount of care that is put into making them AND packaging them for shipment. The are truly a work of art and I am excited to get them installed. ... Thanks again for everything, you guys are amazing.

Authentic carriage doors do more than look historically correct. They swing out. There's something good about that motion. It's more like arms sending you on your way or receiving you back home than a big ...

Back in the day, barns were raised by farmers with the help of neighbors and extended family. The last thing up was the barn door. Built of a basic framework of vertical battens and horizontal ...

The old saying is “good fences make good neighbors”. It’s based on the idea that establishing firm and unambiguous boundaries decreases the chance of disputes. Okay. True. But isn’t there something more to being a ...

My buddy and I were having a friendly conversation recently about beauty, and why it seems to get squeezed out of society’s priorities. He put up the theory that beauty is optional, and morally neutral. Morally neutral? I got ready to step up on my soap box when he pointed out that you can make laws against harming people, but not against having bad taste. Tell that to neighborhood associations, I said. And I’ve personally ...